“He told them, ‘The harvest is plentiful, but the workers are few. Ask the Lord of the harvest, therefore, to send out workers into His harvest field.’”

Raise your hand if you’ve ever volunteered for an organization. I’d bet most of you at one time or another have volunteered for a cause you believed in. Maybe you helped collect canned goods for a community kitchen, or tutored a student, or sold Girl Scout cookies, or ran a 5K race for a good cause. And I’m well aware of the volunteer efforts here at Bethel. We all have different causes we believe in and motivations for volunteering. But I have trouble understanding why some people choose where they volunteer.

A few years ago, NASA advertised for volunteers for a study on how space flight affects healthy bodies. They recruited fit, healthy volunteers who matched the general physical profile of their astronauts. Then they asked these volunteers to spend 15 weeks in a hospital bed so they could measure how this bed-rest position affects human fitness and functioning. Fifteen weeks. In a hospital bed. Most of us would be ready to climb the walls after two days. That sounds miserable. But studies like that are often a little weird.

The Pennsylvania Department of Transportation recruited a small group of volunteers to get drunk so their officers could get training in using the Standardized Field Sobriety Test.

When I stop and think about how a small group of volunteers spread the message and the mission of Jesus Christ from Jerusalem to the whole world, while facing persecution and poverty and beatings and imprisonment and cultural differences and language differences, I’m amazed. How was it possible? And where did it all begin? That’s what our scripture lesson is about this morning.

Our lesson begins with these words, after this the Lord appointed seventy-two others and sent them two by two ahead of Him to every town and place where He was about to go. He told them, the harvest is plentiful, but the workers are few. Ask the Lord of the harvest, therefore, to send out workers into His harvest field.

Notice what’s happening here. Jesus has set His face resolutely for Jerusalem. Only He knows that He’s heading toward His arrest, torture and crucifixion. Only He knows that this will be the end of His earthly mission. It’s time to pass the torch to His followers, His disciples, so that they could carry His message and continue His mission.

So, He appointed seventy-two of them and sent them ahead of Him to every town and place where He was about to go. Now, I’ll bet you’re thinking none of them volunteered and how can that I even say that? They were appointed.

I’ll put in a way that most of us can understand. An Army sergeant walks into the barracks one morning and asked if anyone in his squad knew shorthand. The men in his squad thought that sounded great. Finally, a task involving no physical labor, just sitting and writing shorthand and so ALL of them raised their hands. Good, they’re SHORTHANDED in the mess hall! The army version of volunteering.

Jesus is saying, we’re shorthanded for this mission. You don’t get it yet, but I’m sending you out to the ends of the earth. You’re volunteering. So, ask the Lord of the harvest to send out more workers to help you.

If you sit in church each week and doubt the power of the Holy Spirit, if you sit in church each week and don’t feel like you’re being prepared for acts of mercy and justice and truth that are greater than you can accomplish in your own strength, if your worship and study isn’t leading you to walk out of this church and look for someone who needs the Good News of the Kingdom of God, then you’re still a disciple, not an apostle. And you won’t receive the power and authority and the vision and the Presence of the Spirit of the Living Christ inside of you.

So, if you’re ready to step into your calling as an apostle, there are three primary steps to the process that we can find in today’s lesson.

The first calling of the apostle is to pray. In our lesson for today, we read, ask the Lord of the harvest to send out workers into His harvest field. There are five different Greek words used for “prayer” in the New Testament. Each one has a slightly different meaning and portrays a different approach in our relationship to God.

The word used here for “Ask the Lord of the harvest . . .” is the Greek word deomai. It’s used in the New Testament to refer to the act of begging or pleading.

In Luke 5:12, a man covered in leprosy falls on his face in front of Jesus and begs, “Lord, if you are willing, you can make me clean.”

In Luke 8, a demon-possessed man begs Jesus not to torment him. After Jesus heals him, he begs Jesus to be allowed to follow Him.

In Luke 9, a father begs Jesus to heal his sick son. In each these passages, the word used was deomai.

If you have ever prayed from a heart of desperation or brokenness, then you understand the concept of deomai. And that’s the kind of heart Jesus wants us to have when we pray for those who need to hear the message of Jesus. Jesus is saying, beg for them, plead for them, let your heart break for them. Love them enough to pray for them as desperately as a parent prays for their sick child. Because that kind of love and prayer will then motivate you to go. If we pray in the spirit of deomai, begging the Lord to work in and through us, then He will answer us. And we will be that answer.

The next calling of the apostle is the calling to go, offer peace and heal the sick. When you enter a house, first say, peace to this house. Have you ever thought about how critical peace was to Christ’s ministry?

There is a great story of a medieval knight who returned to his castle one evening looking like a bloody mess. His armor was dented. His face was scarred. His horse was limping. The lord of the castle asked, what hath befallen you, Sir Knight? The knight said, oh, Sire, I have been laboring in your service, robbing and burning and pillaging your enemies to the west. What? I don’t have any enemies to the west! Oh. The knight paused. Finally, he said, well, you do now.

In verse 9 we read, Heal the sick who are there and tell them, ‘The kingdom of God has come near to you. Healing and proclaiming the Kingdom of God were also at the heart of Christ’s ministry. In His three years of ministry recorded in the Gospels this is what Jesus’ daily schedule looked like. He went out, He offered peace to all who would receive Him, and He healed the sick. Read through the New Testament and compare how many times Jesus preached in the synagogues versus how many times Jesus taught, preached, and healed people in the marketplaces and in the fields and in their homes. We can’t fulfill the calling of God in the comfort of the church. That’s not what Jesus meant for us to do. I’m not saying that to start a stampede toward the doors. Not yet. Wait until the closing hymn. Inside these doors, we grow as disciples. Outside these doors, we go as apostles. We’ve got work to do. But that work must be done in the spirit of the Lord Jesus. So, our first calling as apostles is to pray. Our next calling is to go, offer peace and heal the sick.

And our final and most important calling as apostles is to announce the coming of the kingdom of God. The kingdom of God is the world as it will be when God rules over all the world. It will be the kingdom of justice and the fullness of peace. When Jesus taught His disciples to pray, Let Your kingdom come, let Your will be done, on earth as it is in heaven, this is what He was referring to. The birth of Jesus served as the starter’s pistol that announced creation’s race toward the fully realized kingdom of God when Jesus returns as the King of Kings and Lord of Lords. Until that day, we’re called to announce the kingdom of God with our words and even more so with our lives. As apostles, part of our deomai prayer should be to ask God to show us how we can contribute to the causes of peace, justice, mercy and righteousness in our community and in our world.

Jesus told His apostles, The harvest is plentiful, but the workers are few. Ask the Lord of the harvest, therefore, to send out workers into His harvest field. You’re here today within these church walls because someone prayed this prayer, and someone responded to this prayer. You’re here today because seventy-two believers prayed and went and offered peace and healing and announced the coming of the kingdom of God, and their message and their ministry, empowered by the Spirit and authority of Jesus Christ, spread to every continent on earth. But the work isn’t done. Jesus calls you to be His apostle. I hope that when you walk out of these church doors, you will take your part in the greatest mission and message in the history of the world, to announce the coming of the kingdom of God until the day Jesus returns to make it so. 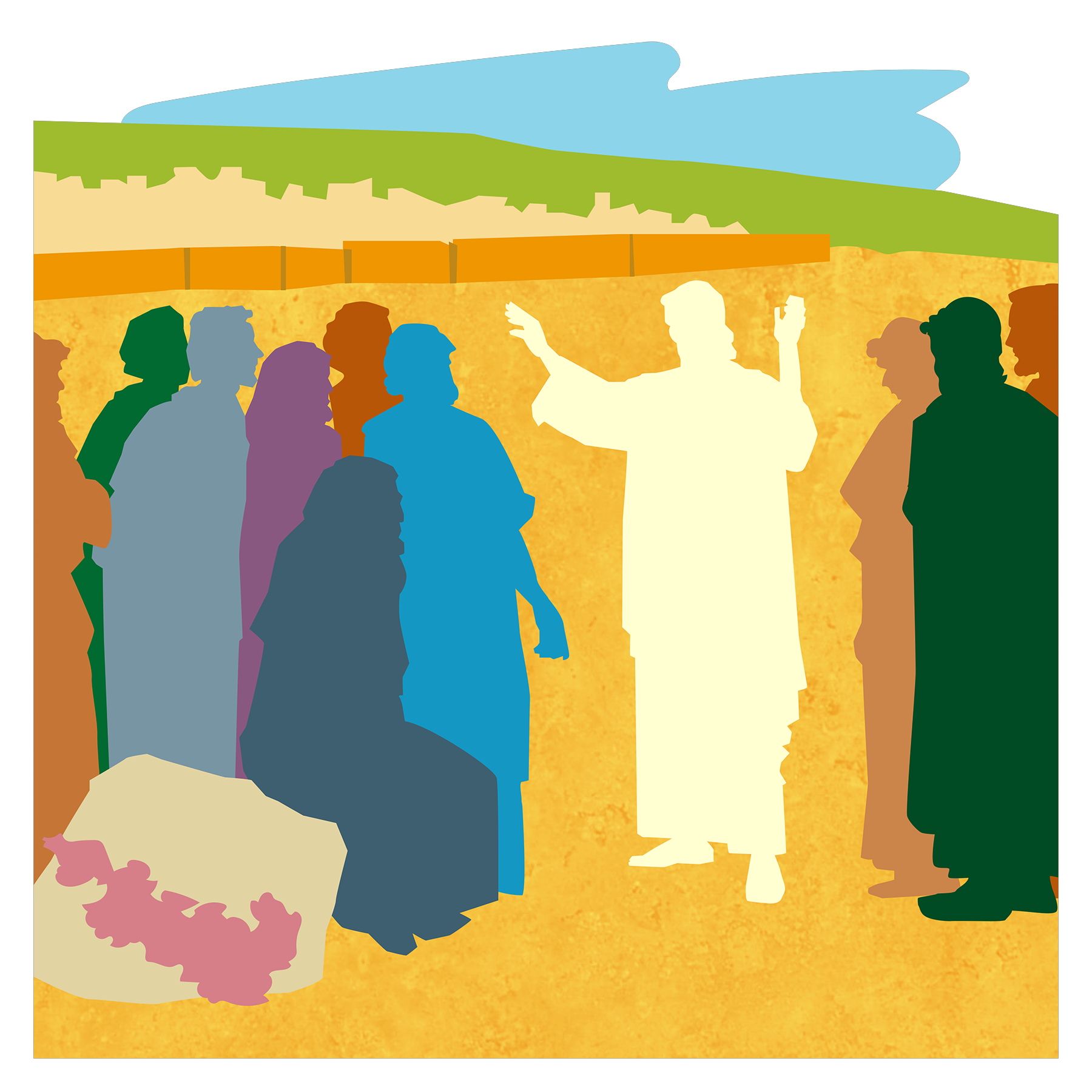